Get fresh music recommendations delivered to your inbox every Friday.

by The Slasher Film Festival Strategy 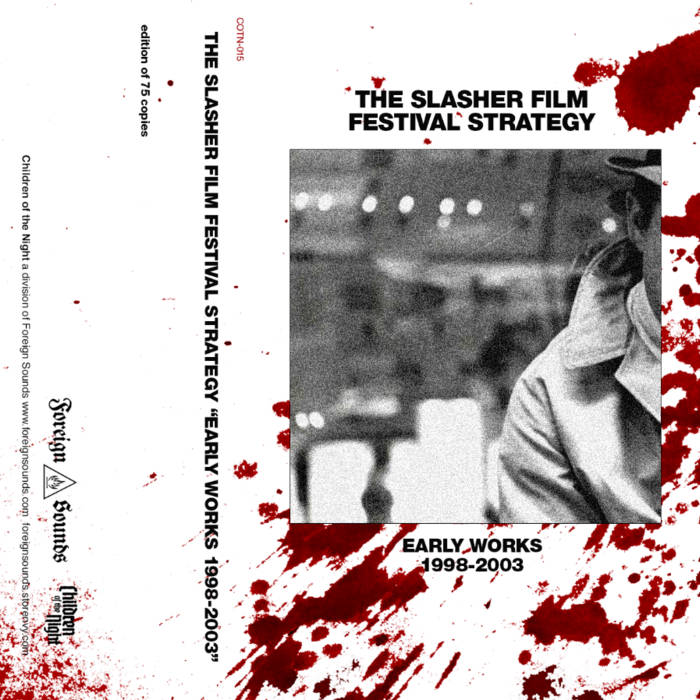 Spun Out Of Control

Children of the Night 015 limited to 75 copies.

THE STORY.
The material on this cassette was recorded from early Summer 1998 through Spring of 2003. During this time The Slasher Film Festival Strategy released approximately 18 releases, several compilation appearances, the split with Bastard Noise, two collaborations with Bastard Noise and several standard tapes, cd-r’s and 3” cd-r’s. There were a small handful of other collaborations as well. The material herein is bookended by the original demo recorded in 1998 “Understanding the Human Mind” and ends with the “Dead Bodies” ep (Emerald City Ruins). SFFS has created music in a variety of genres since its inception, primarily focusing on horror, science fiction and cinematic sounds, but also industrial, dark ambient, drone and experimental. There are several power electronics releases not included in this collection. I have attempted to limit the material to mainly the shorter more cinematic pieces.

The material is raw, crude, rarely rehearsed and often times poorly recorded. The gear was cheap, problematic and the technology primitive. I have made no effort to edit or “clean up” these recordings. The intent of this is simply to archive some of the material as it was and not attempt to recreate or reimagine the work. Some tracks end abruptly, some tracks are louder than others, some have tape hiss or tape warble, others may have abrupt sounds at the beginning or endings of the track. Thanks for sitting through this with me.

BE KIND TO ANIMALS.

Foreign Sounds and sub-label Children of the Night focus on releasing black metal, dungeon synth, dark ambient and experimental hardcore. Formed in South Carolina in 2010, both labels began from the ashes of hardcore/power electronics label KFLR-USA that existed from 1995-2004. The label is based in the Richmond, Virginia label since 2017. ... more

Bandcamp Daily  your guide to the world of Bandcamp